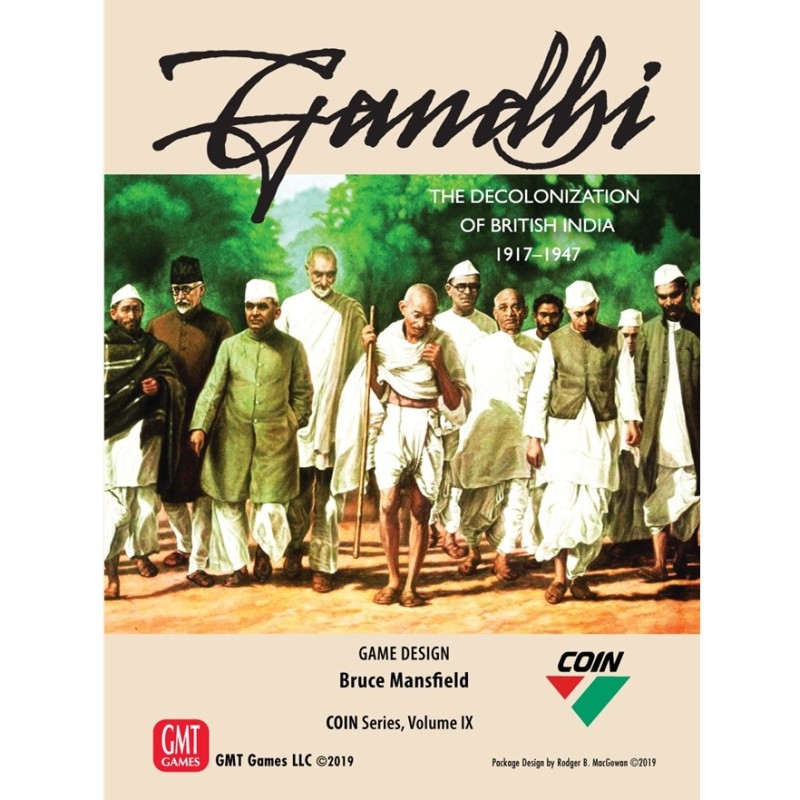 Gandhi: The Decolonization of British India, 1917–1947 is Volume IX in GMT’s acclaimed COIN Series. Exploring one of the world’s most prominent experiments with nonviolent resistance, Gandhi takes us to the subcontinent of India, the jewel in the crown of the British Empire, for a detailed look at the final decades of the British Raj.

"You don't think we're just going to walk out of India?"

"Yes. In the end, you will walk out. Because 100 thousand Englishmen simply cannot control 350 million Indians if those Indians refuse to cooperate. And that is what we intend to achieve: peaceful, nonviolent; non-cooperation--until you, yourselves see the wisdom of leaving, Your Excellency."

In 1917, a minor figure in Indian politics thrust himself onto the world stage and soon became the inspirational leader of the most successful nonviolent movement in world history. Mohandas Gandhi waged a decades-long campaign of civil resistance against the mightiest empire the world had known and won independence for the people of India. Their struggle would become the model for people across the globe, from the Civil Rights Movement in the United States, to Solidarity in Eastern Europe and the People Power Movement in the Philippines. But the story of India in the waning years of the Empire does not belong to Gandhi alone.

India had always been defined by its diversity, home to a wide array of cultures, languages, religions, ethnicities, and polities. Gandhi’s movement was one of many that evolved in those decades. The image of Gandhi in the popular imagination—Gandhi the saintly figure, the father of free India—oversimplifies the past and overlooks the important contributions of others. These ever present fault lines threatened to split India apart. The Muslim League increasingly agitated for Muslim autonomy and was willing to compromise with the British to achieve it. Across India, revolutionary groups formed and challenged Gandhi's nonviolent approach by waging armed struggle against the British. Periodic eruptions of terror and assassination were met by mass arrests and British reprisals. These may have restored order for a time, but such repression only fueled the next uprising. British power in India was always a balancing act, an act that became increasingly difficult to maintain as resistance across India grew. In the end, was it Gandhi’s nonviolent movement that ultimately toppled the Raj? Or was it the accumulation of years of unrest of all types that ultimately led to the decolonization of the largest dominion of Imperial Britain?

Gandhi: The Decolonization of British India, 1917–1947 is Volume IX in GMT’s acclaimed COIN Series. Exploring one of the world’s most prominent experiments with nonviolent resistance, Gandhi takes us to the subcontinent of India, the jewel in the crown of the British Empire, for a detailed look at the final decades of the British Raj. 1 to 4 players compete to determine the future of India; will the transition to home rule be a peaceful one, will India be split apart by partition or civil war, or will it remain firmly in the grip of empire?

Gandhi offers a fresh perspective on the history of insurgency with the addition of a new type of faction to the COIN Series, the Nonviolent (NV) faction, while retaining the multi-faction, asymmetrical, card-assisted system of earlier titles in the COIN Series. COIN veterans will be able to jump right in. Other features include:

Each of the four factions in Gandhi bring their own capabilities and challenges:

In Gandhi, players will face a range of difficult and interesting strategic choices. Following in the innovative footsteps of previous COIN titles, Gandhi weaves together historical, political, and cultural threads and offers an opportunity to study nonviolent and violent resistance in one of the most significant colonial possessions from the age of European imperialism. Civil disobedience and non-cooperation, protests and unrest, imperialism and constructive programme, negotiation, assassination, persuasion, martial law, and many other options await.